The administration of the Rifle Police Department is headed by the Chief of Police, Debra Funston. 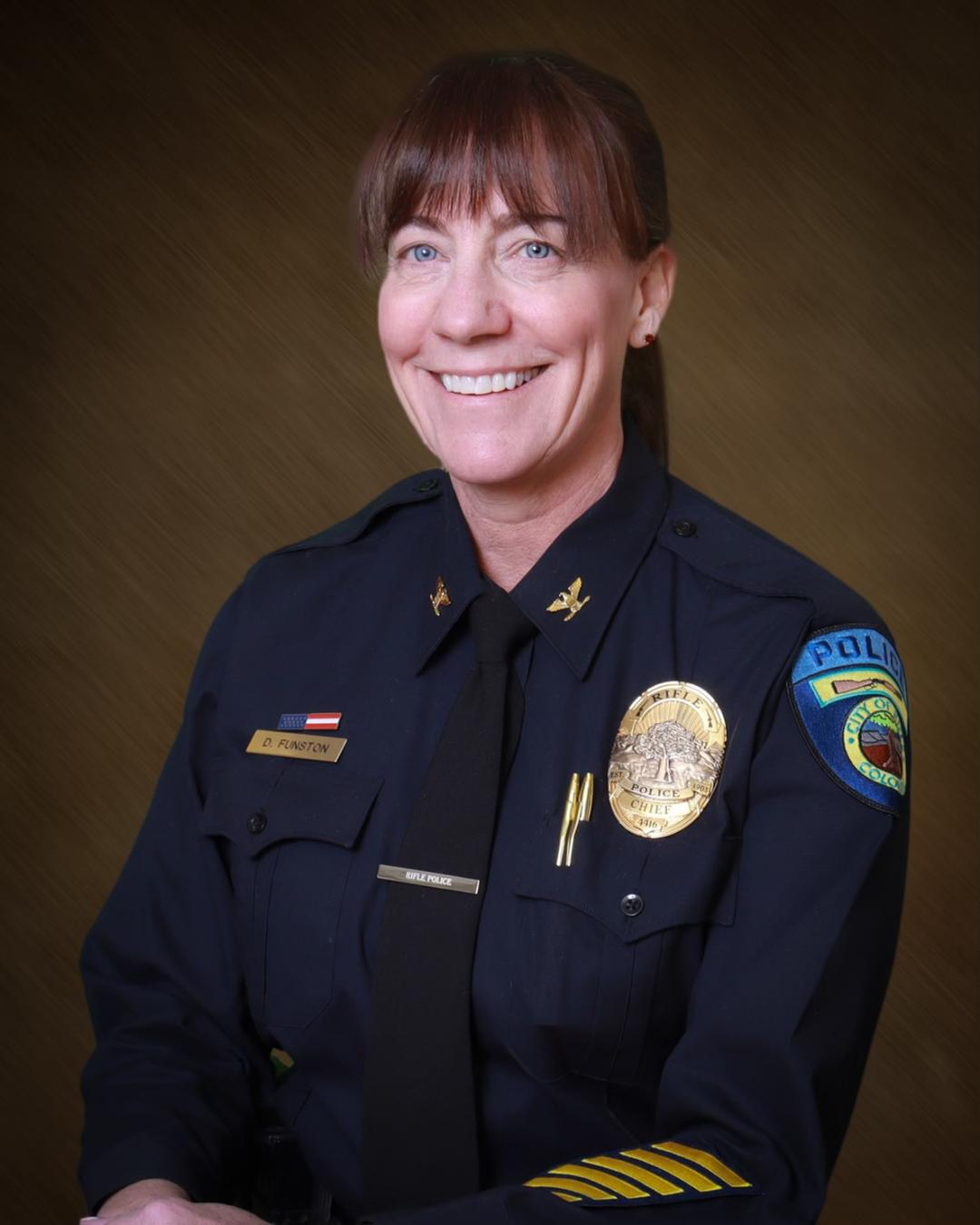 Debra Funston was born and raised on the Western Slope of Colorado. She had the opportunity to live in the State of Virginia while her husband was serving in the Air Force in Hampton, Virginia. During that time, she was hired by the Hampton Police Department and accepted into the Hampton Roads Regional Academy. She worked for three years for the Hampton Police and assisted in forming the first “Adopt-A-School” program in the 80’s. She and her family then made the decision to move back to her home state of Colorado. She was hired as a police officer in her hometown of Montrose, where she worked for 11 years. She was assigned to patrol initially and then promoted to Corporal to oversee and instruct the DARE program in the local school district. When not in school, she was a supervisor assigned to patrol and was a Field Training Officer for the department. She then worked in the detective division and assisted in supervising a handful of investigators and was assigned to the Special Response Unit (Tactical Unit) as one of the commanders. While working for the Montrose Police Department, she was awarded a Meritorious Service Award and Medal of Honor for pulling a man from a burning residence. The Sons of the American Revolution also awarded her the Law Enforcement Commendation Medal. She moved to Steamboat Springs, a ski resort town in the north-central mountains of Colorado. She served in Steamboat as the department’s School Resource Officer and patrol officer. During her tenure in Steamboat, she finished her Bachelor's in Criminal Justice Administration through Columbia Southern University.

In the spring of 2011, she was hired as a detective for the Palisade Police Department, a small bedroom community rich with wineries and fruit orchards. She was charged with setting up their newly formed investigations division and managing their evidence section. She was soon promoted to Sergeant overseeing the Detective Division. In 2015, she was asked to serve as interim Chief of Police for the Palisade Police Department. She was asked to stay on permanently as the Chief of Police. In 2019, Debra completed her Master's Degree in Public Administration through Columbia Southern University. She became involved with the Colorado Association of Chiefs of Police, originally as a regional representative for southwest Colorado.

At the conclusion of the pandemic, Chief Funston felt a need to reach out to other chiefs within the organization to develop a program suited to supporting leaders of law enforcement organizations struggling with recruitment issues, retention issues, and overall stress associated with trying to keep organizations going despite horrible national narratives and resource shortages. She worked with a psychologist referred to her and they worked together to form a program titled “Chiefs Circle”. This platform gave leaders a private zoom platform to vent frustrations and connect with other chiefs during a pandemic that restricted direct contact. She began working with Hundred Life Design as a life coach focusing on working with law enforcement professionals. In 2020, Hundred Life Design began partnering with Axon, Inc., and Chief Funston was asked to continue her coaching within a law enforcement coaching pilot program forming with the newly formed Axon Coaching platform. She served as the Chief of Police for Palisade through the end of 2021.

In January of 2022, she accepted a position with the Rifle Police Department as their Chief of Police and continues working with Axon Coaching and working with agency personnel all over the country. She serves as a Board Member for the Colorado Police Officer Standards and Training (POST) Board, Vice President for the Colorado Association of Chiefs of Police, and Chairman of the Board of Executive Directors for Colorado Crime Information Centers. She continues to consult and work with Axon Coaching and the Colorado Chiefs Circle.

Chief Funston is married with 3 kids and 4 grandchildren who keep her busy when she is not working! Her love of hiking, skiing, photography, and fishing on a paddleboard keeps her close to Colorado.